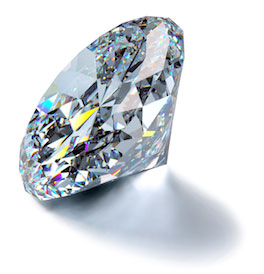 A flawless diamond shows no inclusions or blemishes of any sort when observed by a skilled grader under lOx magnification. To establish a stone as flawless, GIA Gem Trade Laboratory graders examine it with both a microscope and a loupe.The following conditions will still qualify as stone as flawless:

How much naturals should influence the clarity grade of a diamond is a matter of opinion. Opinions range from those who think that any natural excludes a stone from flawless or even internally flawless to those who accept naturals of almost any size in the flawless classification.

GIA takes a “middle-of-the-road” position: If a natural is small enough to be confined within the width of the girdle (except when the girdle is thick) and does not affect the symmetry of the stone by creating a flat spot or indentation, it is considered an identintifying characteristic and does not influence the clarity grade. If, on the other hand, the natural flattens or indents the girdle outline, or can be seen when the stone is viewed face-up, it does affect the grade.

his grade applies to diamonds which have no inclusions, but do have some minor surface blemishes. Characteristics such as surface grain lines, naturals, and extra facets on the crown, render a diamond internally flawless rather than flawless. Diamonds classified as internally flawless must be free from any internal imperfection when examined by a skilled diamond grader using lOx magnification. Blemishes that can be removed by minor repolishing separate the internally flawless from the flawless grade. The one exception is a diamond that reveals minor surface grain lines which ordinarily can not be removed by repolishing.

These grades describe diamonds which contain minute inclusions that are difficult even for skilled graders to see under lOx magnification. An example of VVSI might be a minute pinpoint or hairline feather or perhaps a pinpoint or two visible under the bezel facet. To keep the VVS grades in perspective, it should be noted that they represent the top clarity grade carried by most suppliers and retail jewelers. The VVS grades have often been and still are, presented as flawless or perfect diamonds with no intent to misrepresent-by wholesalers and retailers simply because such minute inclusions are difficult to see.Reflective internal graining, bearded girdles,minor bruises,tiny cavities, etc., would be sufficient to grade the stones as VVS1 or VVS2, depending upon degree.

VERY SLIGHTLY INCLUDED (VS1, and VS2)

Although inclusions are clearly visible under lOx magnification in the VS grades, they are characterized as minor or small in appearance. Diamonds in these grades might have characteristics such as small included crystals, small clouds, small feathers, or several pinpoints. The inclusions in these grades do not affect the beauty or the durability of the stone.

These grades describe stones in which the inclusions are noticeable or fairly easy to see under lOx magnification. Typical characteristics include clouds, included crystals, knots, chips, pits, cavities, and feathers. Usually none are visible when the stones are viewed with the unaided eye.

These grades include diamonds with inclusions which are obvious under 1Ox magnification or can be seen with the unaided eye, and those that have inclusions, such as large cleavages, large included crystals surrounded by feathers, that seriously influence durability. These grades also include diamonds in which the inclusions are so numerous that they affect transparency and brilliance.

The differences between I1, I2, and I3 diamonds are matters of degree. Actually, there are a lot of I1 and I2s sold in the jewelry markets. Most promotional goods, for example, fall into these categories. (As is the case with any diamond, they look their best when they are spotlessly clean. A little time spent explaining this to a customer will help keep them satisfied with what they have bought.). I3, the bottom category, includes diamonds that lack transparency and those with large cleavages and dark inclusions easily visible to the unaided eye.They are actually borderline industrial stones; whether they are graded as industrial or gem qualfty depends onmarket demand.

A large stone with an eye-visible inclusion at or near the girdle may not warrant an I grade, because the inclusion could be removed with much less loss of value than an I grade would suggest. When appraising, some diamond experts grade such stones as I’s, but value them on the basis of the recut grade and lower weight they would have if the inclusion were removed.